It seems silly but it lit up social media that Governor Raimondo went to visit her mother on Mother’s day at a nursing home. It was posted by a woman who claimed it happened at Tockwotten on the water.  Governor Raimondo was asked about her mother and her mothers living situation by the Projo( video above)  at her daily COVID-19 briefing. It seems incredible that a woman ( that nobody had heard of)  with no evidence posted on Facebook a rumor and it made its way into the briefing of a potential Vice-Presidential candidate. 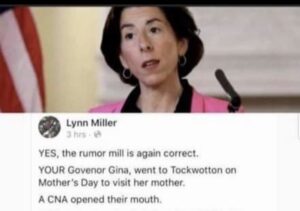 New kid on the GOP Block?

Gump in bed with dems

#BREAKING: Special agents & officers with @FBIBoston @ProvidenceRIPD have arrested Luis Joel Sierra, of Providence, RI, for allegedly torching & destroying a Providence Police cruiser during a riot on 6/2/20. He was safely taken into custody. Details to follow @USAO_RI